I'm writing about the second orthography of Elnee language (オ゛ェｼﾞｭルニョェーッ語), which is used in writing the language the most often.

First, Koloka, the original author of Elnee language, used IPA in the original tweet; we named the writing style the phonetic orthography. (But we usually call it "IPA description.") 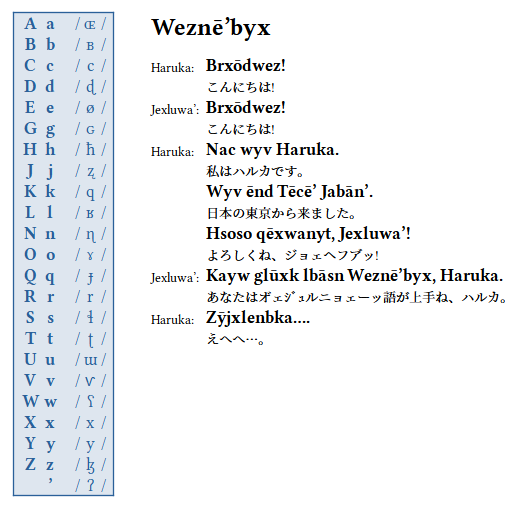 Now, there is three orthographies in the history of Elnee world:

What on Earth is Ƣ?

Ƣ is a Latin letter which was used in several languages historically. In the world we live, it is obsolete now...

The letter Ƣ has been used in the Latin orthographies of various, mostly Turkic languages, such as Azeri or the Jaꞑalif orthography for Tatar. It is also included in pinyin alphabets for Kazakh and Uyghur; and in the 1928 Soviet Kurdish Latin alphabet. It usually represents a voiced velar fricative but is sometimes used for a voiced uvular fricative. All orthographies that used the letter have been phased out and so it is not well-supported in fonts. It can still be seen in pre-1983 books published in the People’s Republic of China.

Being the initial of "Ƣeznē'bix" (/ʕøɮɳøːʔʙyx/), which means "Elnee language", it is a symbolic letter of the language.

The letter which stands for /n̼/ is not Latin m but Cyrillic м. Many of the letters being Latin ones, why Cyrillic м is used? ...We have a proper reason.

In the history, when the orthography was made, not м but m was actually adopted.

Ш is used, too, being like ɯ in quick script. It may be difficult to distinguish it from m.

So they used a form like м on purpose to avoid the undistinguishability, the м was established as a Cyrillic before they knew it.

(In our language constructing, the reason is that we added linguolabials with their letters Cyrillics; the setting above was made later.)

ISO 639 is a set of standards by the International Organization for Standardization that is concerned with representation of names for languages and language groups.

In fact, the reason is that ƣ is ff in transciption to basic Latins (confending beforehand); but we also have proper reason in Elnee world.

It is the premise that ƣ appears very frequently in Elnee language: first-person copula prefix "ƣi-," the initials of interrogative words, "ƣaqē'" which means "person," "Brxōdƣez?!" which means "Hello!," etc.

Once a typewriter for Elnee language was made, based on the general QWERTY layout. They wondered where to put Ƣ, which isn't in basic Latins; it appearing so frequently, it would be good to put it on a place to type easily. ...F's position was unoccupied!!! thus Ƣ was put on the position instead of F.

Though Elnee typewriters were minor in non-Elnee-speaking countries, it wasn't quite needless to write Elnee texts. So alternative writing system to type Elnee by common-layout typewriters appeared. Instead of Ƣ, it was used that F, which is on the same key position.

...Since then, it has been just as you think.

Want to Type Texts in the Orthography II!

Tentatively I made a page to convert texts to Elnee second orthography: Elnee keyboard β

Being β-version, it isn't sure to work, but it should be some useful. (It has stack of issue to solve; I'll do it when I can afford the time...) 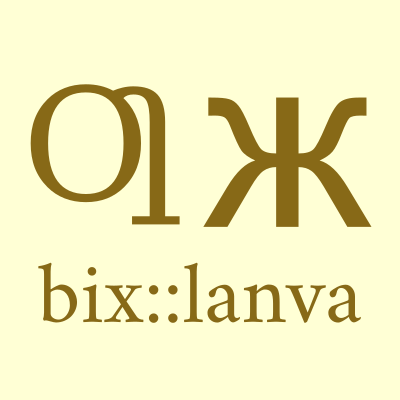